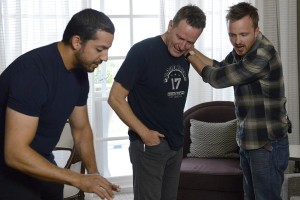 The legendary magician, David Blaine starred in his own 90-minute special which aired on November 19 2013 and he was joined by some of the world’s most iconic people, including Stephen Hawking! Unfortunately, it was only on for the night and it doesn’t look like Blaine will be reappearing on our screens any time soon. This was his first appearance on television in just over a year, his last venture was the spectacular Electrified: One Million Volts Always On…and it involved him performing a 72-hour endurance stunt on top of Pier 54 in New York City. It’s safe to say that viewers are shocked every time they watch this man.

Blaine went old school on 20 different celebrities, by pulling out a deck of cards and some ice picks – not the two things you hear about being together these days are they? He left all his celebrity guests with their eyes wide open and their jaws down to the floor, I guess we’re all the same when watching a magician and we have our very own magician who is upping the stakes and impressing all of his crowds.
Rick Naylor is the name on some people’s lips because they have experienced what I can offer and it is superb, I actually spent 2 weeks in the Intercontinental Hotel in Qatar performing to hundreds of honoured and esteemed guests and he certainly left them with eyes wide open too. The Intercontinental actually called him back to do a further 2 months, performing what he does best!

I offer something no magician in Manchester or very little magicians have done before. I will teach you the art of illusion and magic, something you all want to learn, but I can’t reveal my secrets I’m afraid.
Why not think about getting in touch? You can email me on rick@ricknaylor.com or give me a call on 07909 66 77 23.