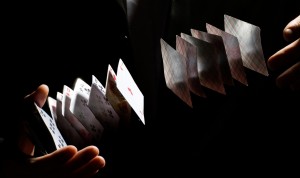 We all know that the art of magic is remarkably interesting. We all wonder how magic works and how magic differs from illusions, but either way, it always baffles the human mind. You can try and figure out the secret behind the magic, but you could be in for a very long night…

There have been numerous magicians who have attempted to make it onto the big stage. Magicians such as Dynamo have their viewers confused after every trick and you are literally left standing there baffled by what has just happened. But that’s why we’re so good at what we do!

Magic can be a very delicate subject and it has been around for centuries. It was originally linked with witchcraft and other paranormal/supernatural stories, hence why some people claim that they don’t believe in magic or are sceptical about it, well that is until they see it up front and are left shocked.

So if you have an event such as a wedding or a corporate meeting coming up and you’re looking to wow your audience and you want to leave them stunned, then why not book me in? If you’re a fan of illusionist magicians like Dynamo and David Blaine, then give me a call. I’m a magician in Manchester who has wowed audiences up and down the city, leaving them baffled at what they’ve just seen.

I’ve been practicing magic and studying illusion from a young age, which is why I’m so passionate about what I do. You can see a list of my services on my website.

You can call me on 07909 66 77 23 or email me at rick@ricknaylor.com. There are very few professional magicians about and luckily, you have your very own illusionist magician in Manchester. But remember, a magician never reveals his secret.