I’m often hired to do birthday parties of all kinds, which is great because I really enjoy doing them. The party environment offers a huge amount of flexibility as to where I can go and what tricks I can perform, and since everyone are in the party mood, it is always a great atmosphere for some close up magic and mind-bending illusions. 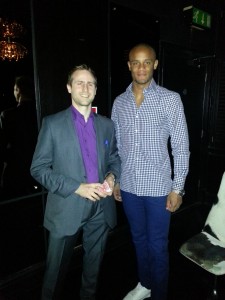 Recently, on the 10th of April, I was hired to perform in the small (but cosy and beautifully lit) function room at the back of the visually stunning Gaucho in Manchester for Vincent Kompany’s private birthday party. I’d previously performed for Mr Kompany’s wife and friends at San Carlo in Manchester near the end of March, which was an occasion that proved to be great fun, and through Elite Entertainments I found myself re-hired to perform at his own party. They were such a nice group of people, who all enjoyed the evening and the magic, (especially when Vincent found his signed card underneath his watch!!) it would be a pleasure to perform for them again in the future.

The restaurant was fantastic, featuring an ultra-modern black and white theme throughout the entire restaurant, under the lighting of beautiful ornate chandeliers ‘floating’ overhead. The food also looked and smelled delicious, so If you have not been there before, it would definitely seem worth a try!

If you’re looking for magicians in Manchester specialising in close up magic for the perfect party entertainment or otherwise, then look no further. As an experienced party magician I can guarantee that I’ll provide fantastic entertainment no matter what event I’m hired for. Just give me a ring on 07909 667 723 and we can have a chat about what I can do for you!